The Fall of the Black Panther Party 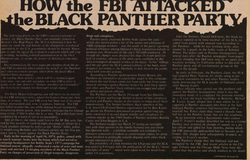 It was believed in the 1960’s that the FBI plotted to take down the Black Panther Party. The FBI, especially the local police in Oakland, CA wanted to destroy the confrontational militant force. Their plot to end the BPP started once Huey P. Newton, founder of the party, was imprisoned on a charge of him killing a policeman. It began as early as August of 1967, that the FBI had instructed its COINTELPRO program to what they referred to as, “neutralizing” these well believed “black nationalist hate groups”. [1] FBI Director J. Edgar Hoover described the Panthers in September 1968 as “the greatest threat to the internal security of the country.” The FBI’s strategic tactics with COINTELPRO to end the BPP consisted of violence, murdering many members and introducing cocaine into the black community. [2]

It was revealed that the federal government’s domestic spying program, COINTELPRO, had inner-working aspects of the Black Panther Party. On May 19, 1969 members of the BPP kidnapped fellow Panther Alex Rackley on account of suspicion of being an informant to the FBI. [3] He was tortured for two days at the New Haven headquarters until he confessed. Warren Kimbo shot Rackley in the head and other member Lonnie McLucas shot him once in the chest. The next day, Rackley was disposed into the Coginchaug River in Middlefield, Connecticut. Once the police identified the body, 9 members of BPP were arrested and were indicted with various charges related to the case. [4] The first exposed illegal activity the BPP, as well as the FBI, partook in was George Sams and Warren Kimbo confessing to the murder of Alex Rackley in exchange for a reduction in sentence.

While the FBI’s stated motivation was “protecting national security, preventing violence, and maintaining the existing social and political order,” COINTELPRO’s tactics involved discrediting targets through psychological warfare, planting false reports in the media, harassment, wrongful imprisonment, and extralegal violence. [5] The goal of the COINTELPRO Black Nationalist program was to prevent any type of unification among what they believed to be black militant leaders, which would then weaken their power and discredit the groups to reduce support and the chance to grow. [6] Fortunately, the Panthers were able to develop a solid base of support from other black groups as well as within the Left as a whole. This type of subversion would be brought to light during the trials, however, so would the Panther’s own internal struggles and secrets.

In the wake of these Rackley trials and other trials that followed, several of the national party leaders were convicted of crimes related to the death of Alex Rackley. Without any leadership, the Party seemed to spiral out of control, as violent confrontations with the police and others further damaged the reputation of the Panthers. Consequentially, many established Panther chapters across the U.S. collectively experienced more than 233 government-authorized sieges as well as raids by numerous COINTERLPRO agents. [7]  As a result they were extensively weakened.  Billy X Jennings, a former Panther, recalls about 25 members being murdered by 1971. [8] The main thrust of the Party had begun to evolve into several factions with differing agendas, and the pressure and weight caused the Party to collapse in on itself. With the CIA introducing cocaine in the black community and giving it to black men to sell in the black neighborhoods of Compton and Los Angeles, this was also a huge factor with the fall of the Panther Party. [9] Many members, including founder Huey P. Newton, became addicted to the drug and let it corrupt their lives. Newton was actually shot and killed on the street, believed to have been buying some at that moment. [10] The federal government succeeded in killing the leaders of the BPP, but the message of freedom and the demand of respect from our government the Party taught in many black neighborhoods did not fade.


10. Hilliard, David, and Lewis Cole, This side of glory: the autobiography of David Hilliard and the story of the Black Panther Party. Boston: Little, Brown, 1993.