Although the Black Panthers played a short role in the civil rights movement their part was immensely important due to the lasting effects they made on society.[1] The Black Panthers were violent and not afraid to get what they wanted. They were preaching for a revolutionary war even though they considered themselves an African American party, they were willing to speak out for all people who were oppressed.[2] Desire can make people do crazy things and the Black Panther Party had 4 big desires. They wanted equality in education, housing, employment, and civil rights.[3] They developed a 10 point plan to achieve these desires and they decided that they would stop at nothing to get what they wanted.

The Black Panther Party was seen as a major threat to the government due to the fact that they were radicals. The call for a revolutionary war against authority at the time of the Vietnam War sent red flags to the FBI.[4] Although the cause is unknown, the FBI quickly shut the BPP movement down. Those who were in favor of the Black Panthers claimed that the FBI used dirty tactics to take them down. The FBI was said to have forged fake letters to other BPP members, organized the murders of BPP members, such as Huggins.[5] The FBI is also believed to have written letters to justices on the court cases that they were involved in so that they had to be arrested for threatening a justice. The last claim I mentioned was supposedly used successfully by the FBI because the trial of “Chicago Eight” the jury was angered at being intimidated by the BPP and allegedly threatened by them. In this particular court case all eight members on trial were found guilty. All of these tactics are heresay and no FBI member has ever confessed to any of these claims.[6] 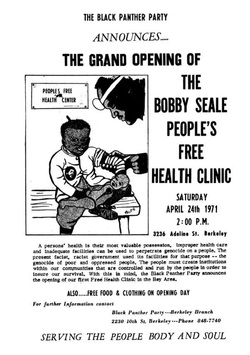 [12]
Although the FBI saw the BPP as, “the greatest threat to the internal security of the country”, it is not fair only call them a threat to society.[7] Viewing the Black Panther Party as purely a revolutionary violent movement would be horribly wrong.

In the early stages, the party began to develop a series of social programs that would provide services that were needed to black and poor people, while at the same time, promoting a model for an alternative more humane life. More than thirty-five of these programs were created and were eventually referred to as Survival Programs. They were operated by Party members under the slogan "survival pending revolution."[8]

The first ever program was the Free Breakfast for Children Program, which spread from being operated at one small Catholic church, in the Fillmore district of San Francisco, to eventually every major city in America.[9] Thousands of poor and hungry children were fed free breakfasts every day by the Party under this program, saving lives and ending famish in many families. With such big change comes major and powerful impact. This program’s magnitude was so great that the federal government had no choice and was shamed into adopting a similar program for public schools across the country. Another program that came from the Black Panther Party was the Free Food Program that fed not only children but all kinds of people who could not afford to do so for themselves. They went on to create Free Medical Health Clinics to provide basic health care for the people who could not pay for it. They also created a Youth Band to help give the community pride. In Huey Newtons novel, “To Die for the People”, he wrote that all of these outcomes were exactly what the community wanted.[10] It is said that the Black Panthers were providing their people with things that their own government was not. For example, community projects that survived throughout the years and kept kids off of the streets. The Black Panthers were not only a trouble to the government they should be seen as people who created lasting projects that bettered their community and other communities around them.[11] 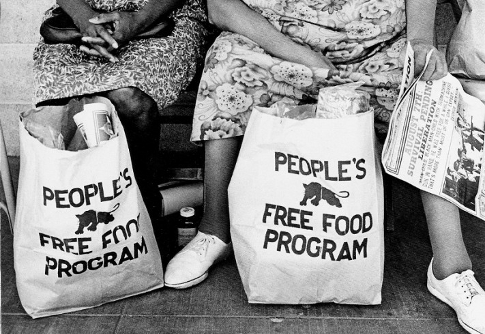 [4]      "Rise and Fall of the Panthers: End of the Black Power Era." Black Panthers. http://www.regroupment.org/main/page_black_panthers.html (accessed May 6, 2014).